KINGFISHER Golf Links in Talafofo has always been one of my favorite destinations on the island, but I had never ventured beyond the golf cart parking lot — until one afternoon some weeks back.

My Chinese friend Emily invited me for a drive around the golf course to shoot photos. I was not that excited, envisioning familiar stretches of a well-manicured golf course near the sea. Emily and I got into one of the golf carts as one of the staffers handed us a map and pointed out the path to follow.

Emi took the driver’s side and I got in the passenger’s seat, ready for a boring drive. We followed the paved sloping path that snaked around the green, made a turn behind the trees and suddenly we were going down fast on a path cut between huge boulders. I held on to my camera and to the golf cart as we sped down and down before making a sharp turn. Then we stopped.

We were on the edge of a cliff facing the sea, and in front of a white circular cottage with a sign that read “Hole 14 Teahouse.”

There was nobody around. We went into the cottage and saw small round tables and benches chained to pillars lining the sides of the tea house. A circular bar/counter dominated the center of the cottage. Edging closer to the flower beds outside the cottage, I stopped in amazement. I was on the edge of a balcony staring at a spectacular panoramic vista of blue sea and sky. It was a picturesque enclosure like private beach photographers can only dream of. A steep cliff bordered the side across from the cottage. I hadn’t seen that beach before. It was deserted.

A stream was flowing from a clearing which looked like the only possible entrance to the beach area. I learned later it was called Jeffrey’s Beach and the proper name is Unai Talafofo. 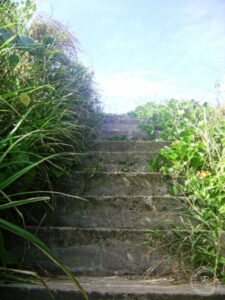 According to those who have been there, the beach is accessible by a side road before reaching Kingfisher Golf Links. You have to have a four-wheel-drive vehicle. And the road has to be dry. On rainy days, it’s all mud and water.

I have heard of Jeffrey’s Beach countless times before, but I thought it was just another name for Hidden Beach. Bikers stumble upon the beach from time to time, but if you don’t really look for it, you won’t know where it is.

Saipan sure has a lot of hidden treasures. You only need to go out and explore them.