HOW long have you been in the island? 10 years? 20 years? 30 years? If you have lived here all your life and performed your daily routine all these time, have you ever paused for a moment to wonder what the island looks from up above?

If you are one of those individuals who doesn’t care what seat is assigned to you whenever you fly in an airplane, or go to sleep immediately even before the seatbelt on sign is turned off, you may have missed a lot. 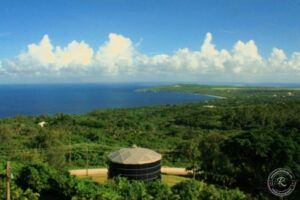 Even short flights like going to Tinian, Rota or Guam can offer you spectacular views you wouldn’t have thought about.

As much as possible, I always ask for a window seat upon checking in, and my first glimpse of the islands when I arrived here over a couple of years ago was a long strip of unpopulated jungle areas with a few roads going around and through it, bordered by pristine aquatic blue waters from all sides. My first thought was that the pilot made a mistake and we were going to make an emergency landing in a jungle but we flew on over the blue oceans for a few minutes before I finally spotted another island — this time occasional buildings and roads. My seatmate told me the first island I saw was Tinian. 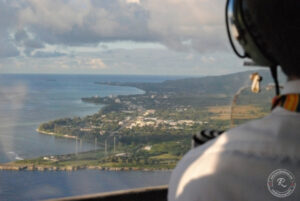 In highly urbanized cities where the airports are located right within the city limits, you may even consider pilots as geniuses for finding the exact spot where to land, but in the CNMI, it’s an entirely different story. You can enjoy the view of this tropical paradise from your window seat — an island wrapped in lush greenery, pristinely blue waters and white shores marred only by a few touches of modernization.

You don’t have to necessarily board an aircraft to view the islands from above. You can drive up to elevated places such as Navy Hill or Mt. Tapochao to get a 360-degree view of the whole island, but on board an aircraft will give you a more thrilling view from a higher angle. 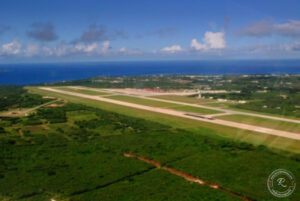 I haven’t had the chance to go around the island onboard an aircraft to take aerial shots yet, and I bet most haven’t done so too but if you browse the internet, you will find various Web sites with spectacular aerial photos showing the beauty of the islands.

An aerial view of the islands at night is another totally different wonder — one you should not miss when you have a chance.